Media makeup jobs are gold dust and extremely hard to land but fear not, we're going to show you how! Film and TV house some of the most sought after media makeup jobs in the industry. The draw of the big and small screen for a media makeup artist is very enticing and with new productions popping up in not only London, New York, but all over the globe every week, there are a lot of media makeup jobs out there. But how to land them and get paid is the question all media makeup artists want to know. Let's take a look.

BE BRUTAL WITH YOUR PORTFOLIO

First and foremost, ensure that your makeup portfolio relates to film and tv media makeup work that you are applying to. This seems obvious but so many portfolios we see are filled with bridal, fashion or personal work that, although show off your makeup skills, does not show that you specialise in the media, film or tv sector. Should you be applying for a job that's very general, include a mix of subtle and extreme makeup looks. When a media makeup job in film or TV provides details of the makeup required, ensure that your opening image in your portfolio related to the makeup look in question. Sending a mix of fashion, beauty and SFX makeup shots just to plump up your portfolio book can deter bigger production companies. Media makeup jobs attract a lot of applicants and casting directors don't have time to sift through irrelevant makeup work when the time comes to apply to the makeup job. You may only have 10 seconds before a casting director makes a decision about your work so place the most relevant, strongest work to the front. 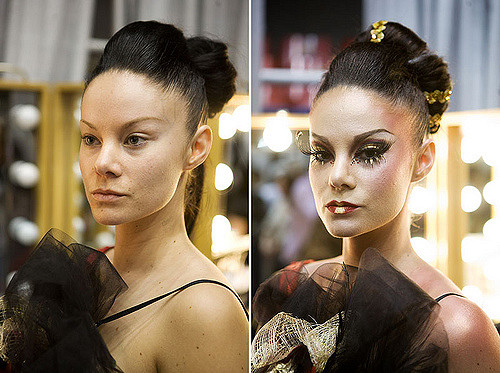 The film and TV industry still operates very much on a word of mouth basis so be prepared to patiently build a network. Don't worry if you're new to the film and tv industry, there are many ways to get noticed. Research new films by checking out the British Film Council's site or IMDB and contact the relevant personnel. Be polite and professional when reaching out to the production. Social media is a soft way to start the approach.

We suggest a short, simple introduction with a link to your makeup portfolio ideally on a website. Avoid attaching multiple makeup images if emailing. A PDF with a clean layout will show a level of professionalism if you don't have a website or a link to a profile that you've set up on a site like The Freelancer Club.

Another great tip is to connect with other freelancers via social media or networking events. Actors, sound engineers, directors... all recommend others in the industry so widen your search to reach out to the industry.

Who you know in the media makeup industry plays a part as does a strong reputation when it comes to landing media makeup jobs. 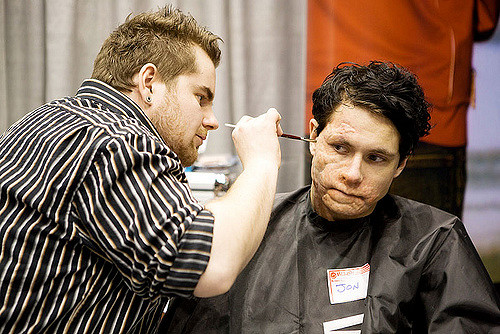 Most makeup artists who studied media makeup or SFX tend to have a base portfolio from their makeup course that covers ageing looks, prosthetics, and Special Effects. We've found that the quality of the photography in such portfolios tends to be amateur as it's normally the student who takes a shot on their phone. To improve your portfolio's presentation, look to hire a photographer to shoot your work at a professional level for that WOW factor.

To save money, set up test shoots with others in the industry who are interested in gaining that type of work for their portfolio. It’s tricky to attract models for this type of collaboration so if you’re producing special effects then it’s best to use a friend who’s willing to donate their face for a few hours or pay a professional model to add an additional layer of quality to the images.

GET ON SET EXPERIENCE

Once you’ve got a base makeup portfolio in place, it’s time to start getting some real on-set experience. In an ideal world, you’d assist a makeup artist on a shoot and be paid for your time as a qualified artist. Unfortunately, most media makeup artists interested in film and TV have to volunteer their time on student films or low budget productions. The Freelancer Club is strongly against the unpaid aspect of this approach. If there is no budget to pay the team, ask for a percentage of any profits or compensation of some form for your time. Media makeup artists tend to be last on the list so raise your voice and make sure you're getting paid in some form for your services.

Whilst on set gaining experience, it’s prime time for networking. Get to know the players, cast, crew and influential personnel who may call on you in the future. The big breaks for makeup artists starting out tend to come when a small production they were working on blows up and you’re asked to come aback when the budget grows. Make sure to bring business cards and don't be shy to hand them out. A quick link to you portfolio via your phone is also handy to show your work to anyone that's interested.

ADAPTING TO THE LIFE

Media makeup artists often work very long hours and can be on location for weeks, sometimes months at a time. The glamour of working a film or TV sounds great but it's a lot of hard work with long stints of waiting around. SFX makeup work can be particularly gruelling as certain looks often take hours to put on an actor. Makeup artists are required to stick around for touch ups while filming takes place and then spend a few more hours removing the makeup at the end of a long day.

Another major disturbance as a media makeup artist is being away from your friends and family during filming. Ensure you've a way to call, message or video chat throughout the time and don't forget a good book - you'll need it!